Trisector uses tile maps for the levels, and each level’s tile map includes a Background, a Base layer, a Collision layer, and an Object layer. This article will talk about the design, creation and structure of the levels and the tile maps.

While learning Objective C, my first project was an RPG engine that used tile maps for the world maps. The RPG engine was fairly complete (at least for a first feature pass), but was eventually scrapped due to the high art requirements. One thing that was mostly salvaged from the RPG project was the tile based rendering engine which was used in early Trisector builds. However, most of the original code and structure of that tile engine was heavily refactored for performance reasons and no longer reflects that original RPG engine.

All of the levels in Trisector are tile maps created using the Tiled map editor. Tiled allowed for the maps to have multiple tile and object layers, and Trisector uses two tile layers (Collision and Base), and one object layer (Objects). The Collision tile layer corresponds to the foreground layer, and the Base tile layer corresponds to the background layer. Generally the maps are 15 tiles high and between 200-600 tiles wide.

The early levels have wide corridors and few enemies, whereas the later levels have more technical corridors and tons more enemies (and bullets). The enemies in the early levels shoot a lot less than those in the later levels, and typically don’t fire the player tracking projectiles. The later levels are bullet filled with numerous enemies that are sure to cause trouble if they are not quickly destroyed. Most enemies will path through the whole level, so it’s a good idea to destroy them as early as possible.

For example, if there was a pillar starting at tile 100 in the Collision layer, a similar pillar could be placed at tile 65 in the Base layer in order to appear in game at the same position. Also, if the pillar was 5 tiles with in the Collision layer, then the corresponding pillar would be 4 tiles wide in the Base layer to provide some depth of field.

Here’s a view of the Base layer for Level 9 in the Tiled editor starting around tile column 115: 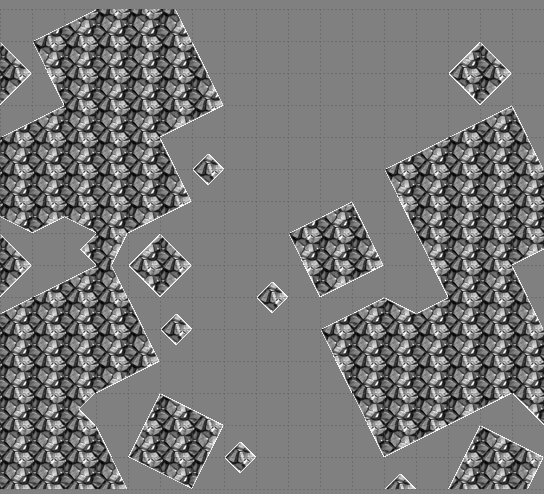 And here’s a view of the Collision and Object layers for Level 9 in the Tiled editor starting around tile column 176. Note, the red lines are the enemy movement paths: 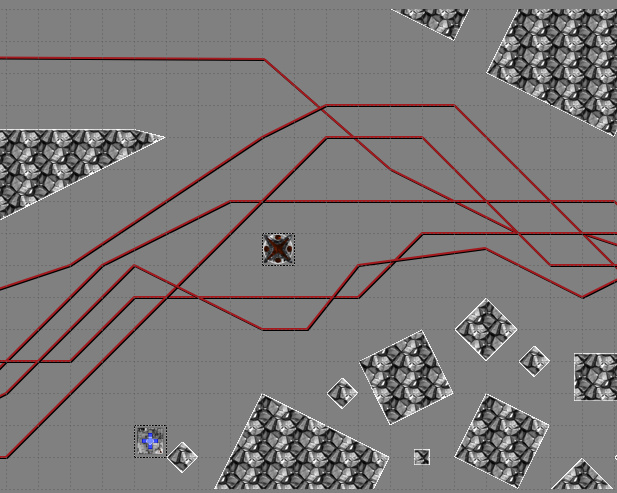 And here is what all of the layers look like together in the game: 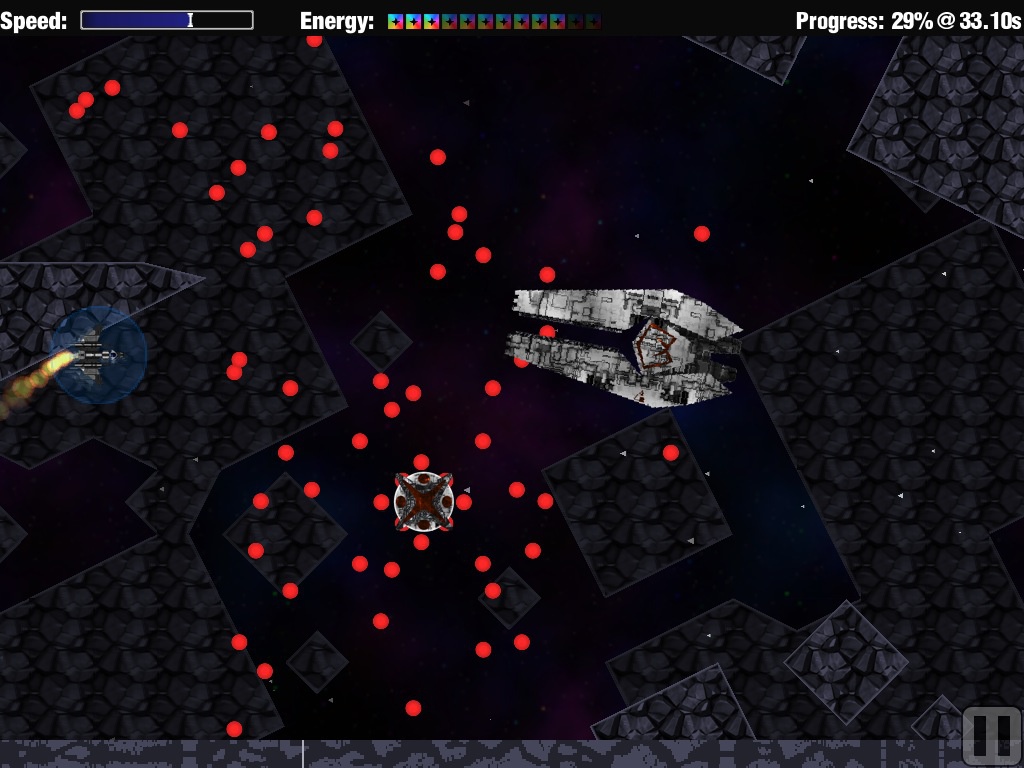 The Object layer holds all of the in game objects such as enemies, enemy paths, and power-up objects. Each object in the Object layer has a type and an associated tile. The object tile shown in the tiled editor is a placeholder and may not match the final tile configuration in the engine. For example, the Assault Fighter is shown as a single 1x1 tile sprite in the editor, but is actually a 2x2 tile sprite in the game.

The power-ups don’t have any properties besides type:

Example of a power-up object in the map file:

Additionally, each enemy type had a default set of properties mat be overwritten per object by including additional properties:

The following are a few examples of some enemy objects in the map file:

The tile map data for each tile layer is base64 encoded with zlib compression. The following is a Base layer example from a test map file:

Each level maps was exported as a TMX map. The engine reads and parses each TMX map file via cocos2d’s CCTMXMapInfo methods.

After reading the map data into a CCTMXMapInfo object, the map dimensions are read and stored:

Then, the background image file and color is read, and associated background sprite is created and tinted:

Next, the Base and Collision tile layers are read and processed:

The loadBaseTileMap and loadCollisionTileMap methods are similar to each other in that they create a NSMutableArray with the initial capacity of the map (e.g. mapWidth * mapHeight). Also, the Tint Color property is read for that layer similar to above (e.g. [[tileLayer properties] valueForKey:@“Color”]). Finally, the tiles of the map are iterated in reverse row order since TMX is stored different from how Trisector uses them. The tileGID is stored as a NSNumber into the associated NSMutableArray for that layer:

Finally, the object layer is read and parsed, and then the various objects are created:

There are a few reasons why I didn’t use cocos2d’s CCTMXMap methods out of the box. First, Trisector adds and removes objects and tiles to the corresponding CCSpriteBatchNode on each major tile tick, which (after much testing and refactoring) was the most efficient way I found to display the various tile layers in the engine. I tried the native CCTMXMap loading and scrolling methods and they were considerably slower than what Trisector ended up using. Further, I tried a handful of different methods for culling and adding tiles and objects to the various scroll layers, and the current implementation reflects the the most efficient method I found.

Since I was using my own methods of managing the sprites in the CCSpriteBatchNode layers, I didn’t need to have CCTMXMap create all of the objects since they would be thrown away after reading the TileIDs. Thus, the above methods of reading the tile and object layers' data are somewhat different from the default CCTMXMap methods.

Hope you found this article on Trisector’s Maps interesting,